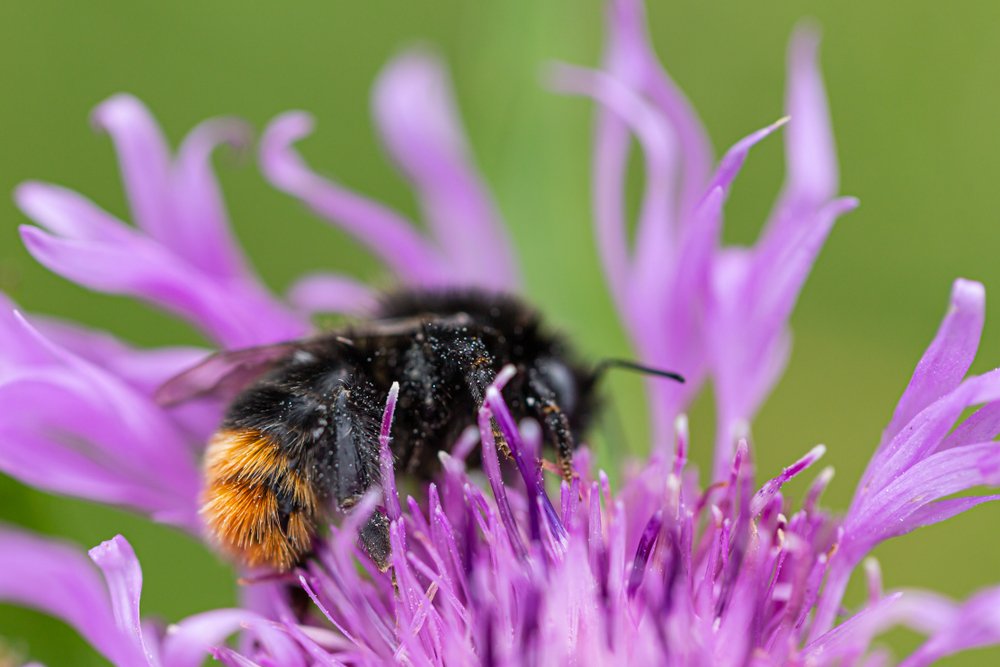 The Red-tailed Bumblebee (Bombus Lapidarius) is extremely common in gardens, farmland, hedgerows, woodlands and any place across the UK that has flowers for it to feed on.

You can begin to find them in the early spring and buzzing around until the autumn begins and the cooler months roll in. The Red-Tailed Queen Bumblebee emerges from hibernation first and will lay her eggs that will turn into healthy workers who will look after the nest. Males tend to come out later on and mate with possible future queens. Of course, when the autumn comes, the males and the previous queen die while the rest go into hibernation.

They are very sociable insects that nest under stones or in deserted underground burrows. Yes, for these Red-tailed bumblebees, you will have to discard everything you thought you knew about beehives!

These guys are aptly named. The females are large and black with their red tail being the only pop of colour. However, the males are smaller (this is a fairly common trait within the animal kingdom) and, along with the red tail, they sport two yellow stripes on the thorax and one right at the bottom of their abdomen. Although the males’ tail tends to fade very quickly and so, it may appear white or yellow, depending on how young or worn out the specimen is.

The species is strikingly similar to the rare Red-shanked carder (Bombus Ruderarius) but they are more well-rounded, sporting a lengthier face. Another bee you could mistake the Red-tailed species for is the Red-tailed cuckoo bumblebee (Bombus Rupestris), however, the males of this kind have distinctly greying yellow bands and the females have extremely dark wings.

The most easily spotted difference between the two similar bumblebee species and the Red-tailed bumblebee (Bombus lapidarius), is that the males have red hairs on their tibiae, but yellow ones on their face.