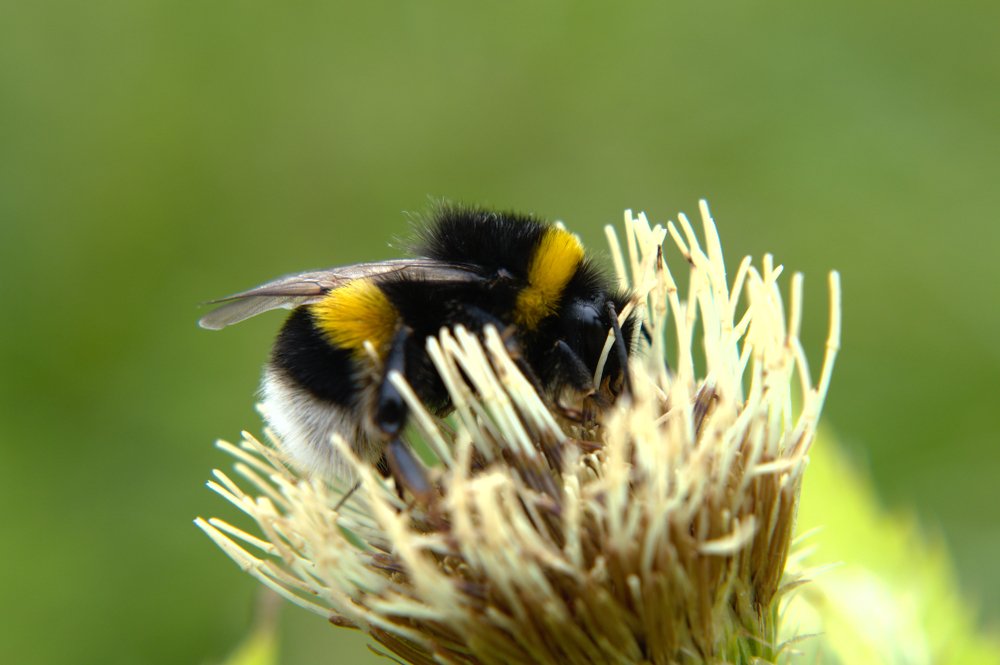 The White-tailed bumblebee (Bombus lucorum) is one of the ‘Big 7’ most plentiful species found in a wide array of habitats around the UK. Also, it is one of the usual black and yellow type of bumblebees.

This type has a lemon kind of yellow band at the very top of the thorax, paired with a brighter yellow stripe in the middle and a completely white tail. However, the males have yellow facial hairs (unlike their female counterparts) and tend to be far more yellow than the females.

The Northern White-tailed queens have a collar which travels further down the thorax sides than White-tailed bumblebees. Additionally, Cryptic bumblebee queens can be identified due to the s-shaped black mark running through the yellow band. However, these markings have been questioned by researchers and so, more evidence is needed to cement this theory into a fact.

As previously mentioned, they are really common and can be seen emerging in the spring. Usually, they will feed on flowers right up until the autumn season begins again.

Across the United Kingdom, the White-tailed bumblebee (Bombus lucorum) can be found in woodlands, hedgerows, heathland, farmland and gardens — anywhere that the right flowers grow for them to feed on. Since this species have a relatively short tongue, they normally prefer to forage on daisies and flowers with easy-to-reach pollen spots.

Unfortunately, there have been reports that the Bombus Lucorum population is declining throughout Britain. This is the time where we, as humans, need to step up and truly save the bees!