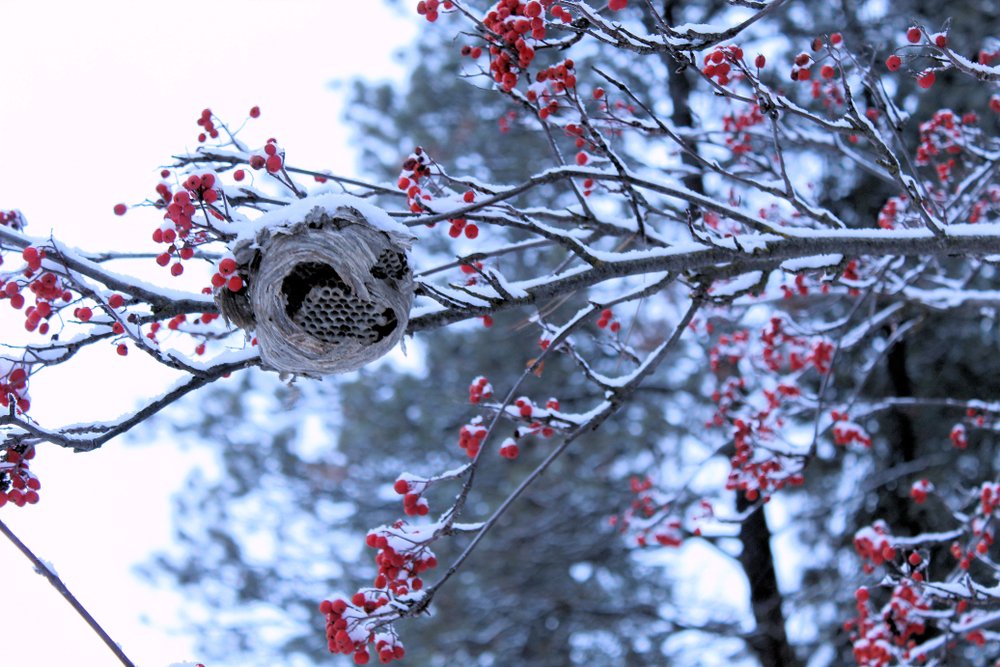 The spring and summer months bring about the familiar noise of the buzzing bees and the sight of those fuzzies on every flower in the vicinity. But, what happens when the wintertime rolls around? Where do they go? What do they eat? All of these burning bees in winter questions are about to be answered!

What Do Bees Do in The Winter — Hibernate or Die?

We’ll start with the bumblebees…

Once winter starts to show its frosty fingers, the bumblebee colonies are all done and dusted. The colony has turned to focus on the production of the queen and worker bumblebees, after the foraging to provide for the new generation has ended. The females and males will mate with those from separate colonies and eventually lay eggs for the next spring. Unfortunately, the males have no done all they need to do and will not live through the winter and thus, they die out.

At this point, the queens will fill themselves with pollen and nectar inside the nest where they cannot be harmed by encroaching beasties. Then, they will find the right place for them to hunker down over winter (below ground level is usually their preference). These hardy queens are the only bumblebees that make it through the winter since they stock up on loads of fat before they go into hibernation.

However, the United Kingdom has been experiencing major climate change due to global warming, thus people have discovered that the bumblebee life cycle is changing.

Queens from the Buff-tailed bumblebee (Bombus terrestris) species (and others, but mainly this variety) are beginning colonies during wintertime! This means that, instead of starting their hibernation during October, they start their nesting process. The workers emerging at this time feast on plants that are in bloom, such as heathers, honeysuckle and rhododendron.

Because of this, the new males and queens will come out in February and consequently, can be spotted much earlier in the year than in the past. For those who live in the northern parts of the United Kingdom, you should keep your eye out for these guys at this time.

So, what about solitary bees?

If you are privy to the wide array of solitary bee species that reside in the UK, you can quite rightly guess that their winter habits are also extremely different from one another.

For the majority of them, they are accustomed to a yearly life cycle that tends to run like clockwork. To start with, the female with collect nectar and pollen for the chambers in which they lay their eggs. After this, they seal off their egg- and pollen-filled nest with a range of materials (depending on the species) so their young are kept safe while they transition into adults. The transformation takes the entirety of the winter months, after which they will emerge and be ready to live their month-long life span. Since their time on earth is so short, sadly they never actually have any contact with their children!

The solitary bee species that are known as “spring flying” ones like to come out as soon as practicable for them to make the most of early-flowerers like hawthorn and coltsfoot. These guys turn into adults during the summer months and snuggle down into a cocoon over winter, ready for the following spring. Unfortunately, because they are adults when it is cocoon time, they are more sensitive to the happenings around them. Consequently, they can be spotted buzzing around before their time if their nests encounter some trouble.

However, those that fly later on will just be larvae during the winter months and emerge as adults either in the later spring months or early summer.

The furrow bee species that are present in the south tend to mate during autumn when the males are in their prime. Then, the ones from the last year will experience winter as adults, producing nests to create more females right away.

On the other hand, the same species up in the north will spend its life akin to the average solitary bee (i.e. the adults die off each year).

Finally, we get to the Carpenter bee (Ceratina cyanea) who has the most unusual overwinter habit!

These little fuzzies reside in the south-east of England and are particularly unique bees in winter. Why is that, we hear you ask? Well, the female Carpenter bee and the males both hibernate during this time! Commonly, they will take up bramble stems as their cute winter retreat.

Where Do Bees Go in The Winter?

So, we have discussed what exactly they do over the winter period but, where do they go? That’s a whole new topic! Ready? Let’s dive right on into it!

As the environment becomes increasingly colder, our honeybees seek to retain as much warmth as possible by retreating to their hives. The thought at the forefront of their mind, however, is ensuring their queen stays warm, not themselves. For this, they huddle around her so she can be snug as a bug in a rug right in the middle of them all!

During these times, their honey makes for a vital source of food while they are hive-ridden, bees will eat their honey. Although, because they are, of course, awake, they can go out on any warm(er) day and forage for more nectar.

The bumblebees, on the other hand, are burrowers.

These guys have an annual life cycle which means that once they have mated, the males, workers and previous queens die off during the winter months. The new queens will then hibernate through this period.

To do this, they find exposed soil or easy-to-wiggle under stones to stay out of the cold. Typically, they prefer areas that are facing north because this will prevent them from being awoken too early. However, as you may imagine, some of them do still come out in a state of confusion when the winter days get warmer.

As we previously mentioned, the recent climate change has unfortunately altered the winter habits of bumblebees and so, some of the new queens will start new nests instead of burrowing down.

The solitary bees are as diverse as always!

Like you know, the winter habits of the various solitary bee species depend according to which variety they are.

Usually, adult males and females will die before the cold period begins since the amazing females have safely sealed their eggs into the holes.

Since some of them cocoon themselves as adults in a plethora of surroundings (this tends to be those that come out in the spring), if their nest is disturbed, you could see them earlier than is typically expected.

What Do Bees Eat in The Winter?

So, you know almost everything about the different bees and their wintertime happenings, however, what exactly do bees eat in winter? Now is your chance to find out!

Some types of bees, like honeybees, for example, will emerge on those warm winter days to collect extra nectar. They tend to feed on plants like:

Plus, people who keep honeybee colonies tend to provide feeders which contain a sugar syrup to boost their strengths as the cold creeps in.

Solitary bees, on the other hand, ensure to put pollen and nectar stores within their chambers so, as the eggs emerge, they have enough to keep them going.

Although, the queens of many types of bumblebees will simply use the fat reserves within themselves that come from their gorging fest on nectar and pollen beforehand. This is enough to see them through to their proper emergence times.

What Can You Do to Help Our Bees in Winter?

So, how can you help our all-important pollinators to stay as healthy and safe as possible during the dreaded winter?

The most important thing, in our humble opinion, is to plant flowers that will bloom in winter. Start with hellebores, snowdrops, heathers and a few winter honeysuckles. They will love you for it!

Secondly, do not dig anywhere. Or, at least not where there may be solitary bee nests.

Thirdly, try to build an area in your garden that is super attractive for bees. To do this, you could always construct a pile of logs, rocks or even try making an earth bank. North-facing is always best for the species that hibernate in winter due to the fact that they won’t be awakened early by unnecessary warming.

Last but not least, if you have bought a bee hotel, you will need to move it as the leaves change. Make sure the new location is in a dry spot (possibly in an outbuilding). This will ensure your bees don’t get disturbed by frost or dampness.

And there you have it!

Phew, now you know how bees survive, where they go and what bees eat in the winter. You may as well call yourself a winter bees expert now!