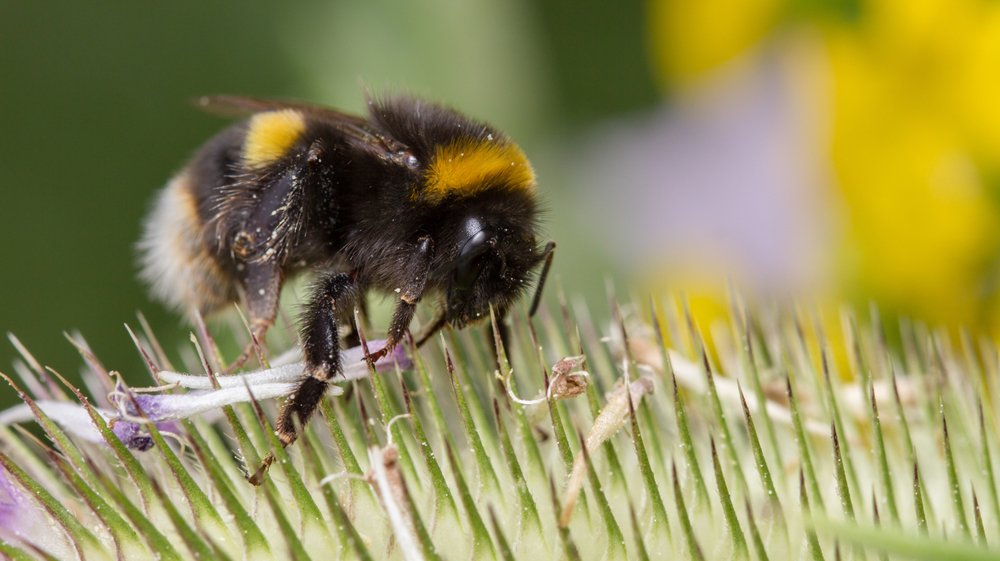 Referred to as one of the ‘Big 7’, Buff-tailed bumblebees are the giants of the bumblebee world. A plentiful species throughout many habitats up and down the UK, the Bombus Terrestris is by far one of the earliest bees to be spotted in gardens. With the large queens often the first to be seen around February or March time, depending on the weather.

Typically, they nest in the ground of parks and gardens where mice have previously made nests for their young. They can be quite large and house around 500 Buff-tailed bumblebees.

Ironically, the tails of workers and males of this type of bumblebee species are white. While the only kind who has a buff coloured tail are the queens. With that being said, you will usually find that the males sport a buffed yellow colour band just in front of their tail.

The Bombus Terrestris queens are very big and thus, pretty distinctive, they can be around 18mm in length. However, it is difficult to tell the workers apart from the White-tailed bumblebee (Bombus Lucorum). Therefore, comparing their DNA is the only way to reliably identify the species. Unhelpfully, the distinctions between these sets of bumblebees remain at a reasonably blurred line. However, researchers’ understanding is continuously growing about similar kinds.

The Broken-belted bumblebee (Bombus soroeensis) is another species that is commonly confused with the Buff-tailed Bumblebee, however, they are decidedly rarer. Plus, their yellow abdominal stripe stretches onto the first segment and the band in front of the white tail is orange instead of yellow.

The greatest aspect of these Buff-tailed bumblebees is that they are pretty smart when it comes to nectar collecting. If they find a juicy looking flower that is too long for their tongue, they will bite a hole in the bottom of it so they can easily extract it. Giving them the nickname of ‘nectar robbers’. How clever can they be? Other insects will also make use this handy hole when looking for nectar.