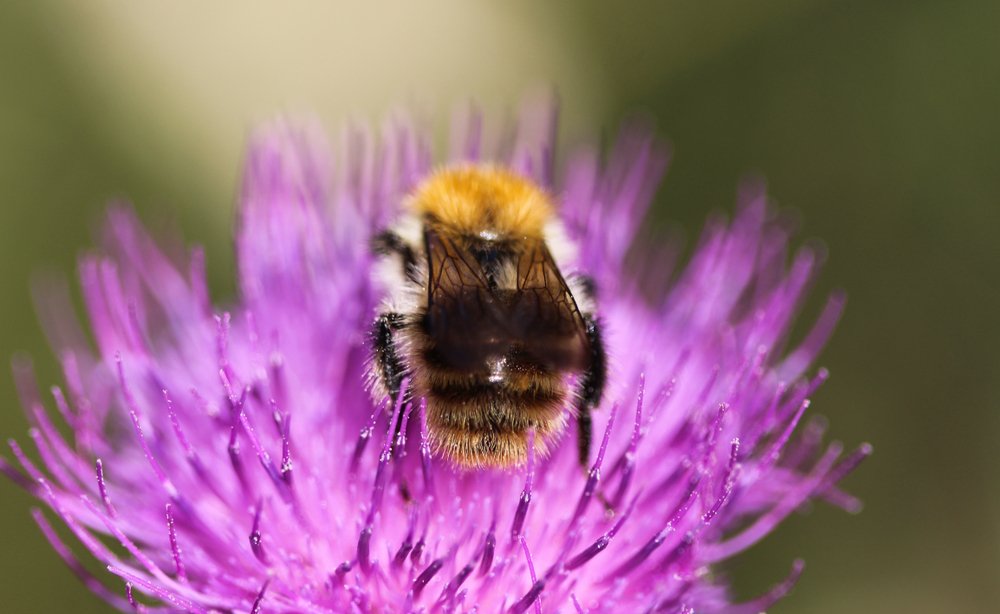 The Brown-banded carder bumblebee (Bombus Humilis) is the rarest type of the three completely ginger bumblebees. At one point, they were present throughout the majority of England and Wales, but now, you will only find them in the south around Salisbury Plain and Thames Gateway. Thankfully, it has been reported that they are showing recovery signs in the Midlands.

To spot one of these beauties, you will have to travel to open grasslands that harbour an extensive number of flowers. They show a strong love for Red Bartsia, Knapweed and Clover.

While the queen is slightly bigger (13mm) than the workers (10mm) and males (11mm), which is a common trait amongst all bumblebees, they otherwise look extremely similar. Their thoraxes all a glorious ginger colour, while their abdomens are more buffed. Typically, you will find a stripe of dark ginger hairs on the second abdominal section but you have to look relatively close to see this.

It is easy to tell the Brown-banded carder bumblebee, Moss carder bumblebee (Bombus Muscorum) and the Common carder bumblebee (Bombus Pascuorum) apart from the other bumblebee species as these are the only fully ginger ones. Consequently, it makes separating the three all-ginger ones quite a challenge. The Field cuckoo (Bombus Campestris) and Great yellow (Bombus Distinguendus) can both have a unicolourous appearance, but these two bumblebees are yellow, rather than ginger in colour, and between their wing bases you will find a dark bar.

Frustratingly, you cannot use the Bombus Humilis darker brown abdominal band as a defining feature since the Moss carder (Bombus muscorum) tends to have a yellow band here, while the Common carder (Bombus pascuorum) has a darker one. If you look closely, you could try to make out the spattering of black hairs above the wings of the Brown-banded carder bumblebee (Bombus humilis) because the Moss carder doesn’t have this. Of course, you can always use the male’s genital capsules to distinguish between them!